Below is an example of ACS Indexing, obtained from SP metadata file.


In the above example,

Starting from R13.0, Citrix ADC as SAML Identity Provider (IdP) support ACS indexing. The SAML IdP imports ACS indexing configuration from SP metadata only. ACS indexing cannot be configured via GUI or CLI. R13.0 also provides additional SAML debugging messages, which can be useful in troubleshooting. If you running an older version, you must upgrade to R13.0 to use this feature. Please refer to the release notes for more information.

This section describes the call flow between Citrix ADC and Cisco UCM. This example is a SP initiated SSO where an unauthenticated client connects to SP, which then redirects the client to IdP for authentication. The successfully authenticated client is redirected back to SP and is allowed to access the resource. 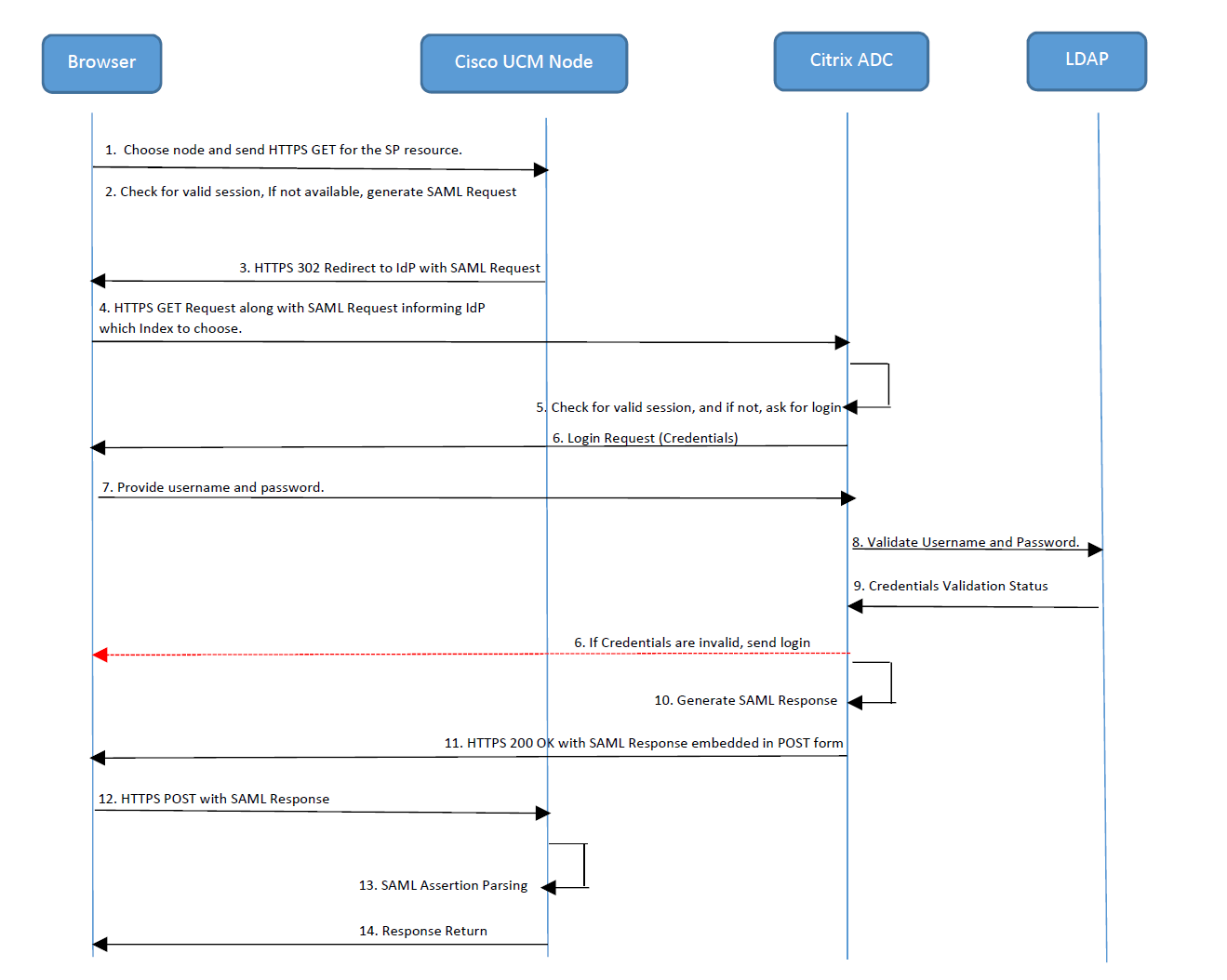 1. Create an authentication virtual server on Citrix ADC which represents the IdP.


2. Create SAML IdP Policy which is bound to the authentication vserver.

Name of the SSL certificate-key pair of SAML IdP, referred here as idp.test.com. This certificate is used to sign the SAMLResponse that is sent to Service Provider after successful authentication

It is an interval in minutes after which Citrix ADC tries to refresh metadata configuration file from its hosted location.

It is a URL where authenticated users will be redirected at SP. This parameter will not be used in SAML assertion if Citrix ADC has the ACS indexing information. If Citrix ADC fails to download metadata file from its hosted location, then ACS URL will be used.

It is an option you can specify to ensure only Assertions signed with the SP Certificate are accepted. In this example, we have set this to OFF.

It is a unique identifier, typically a URL, to identify the SP. However, Cisco UCM doesn’t accept the audience value auto-generated by Citrix ADC in SAML response. This parameter should be manually configured and correct value of audience is the SP EntityID in its metadata, which is “NODE-C1.ucm.test.com”.

Cisco UCM expects User Login name to be returned as an attribute in SAML Assertion. Attribute must be defined as “uid”.

As mentioned above in the document, Citrix ADC supports ACS Indexing configuration by importing SP metadata configuration only. Manual configuration is not supported as of now. SP metadata provides information about SP parameters such as SP Entity ID, assertion format and ACS indexing. ADC will download the metadatafile using HTTP/HTTPS. It is highly recommended that metadata file should be hosted external to ADC.

Below is the sample metadata file from Cisco UCM that is imported by Citrix ADC.

Some important parameters in the SP metadata are:

Uniquely identifies SP. Usually, it is the publisher node in Cisco UCM cluster.

It defines that SAML assertion sent by Citrix ADC must be signed using IdP Certificate or unsigned.

It is the format that the Username is transmitted and expected between the IdP and SP.

idp.test.com is the FQDN of authentication virtual server.

DP_AUTH_Prof_AAA_EN is the name of SAML IdP Policy bound to authentication VS.

Below is the sample IdP metadata generated by ADC.

Please note that every time IdP metadata link is refreshed, a new signature is generated in metadata XML file. Therefore, SP should import most recent metadata file with the updated signature.

In the following SAML request, Index 0 is requested which corresponds to NODE-C3. You will see that NODE-C3 as destination URL in SAML response.

In case of SAML exceptions faced at Cisco UCM, always verify that correct ACS index is returned in SAML response.One common reason for not returning correct index is when Citrix ADC is unable to fetch metadata file, thus responding with incorrect ACS index.

Cisco UCM does not accept URI as audience. This has to be manually configured as SP ID in SAML IdP policy, otherwise default ADC settings will update audience as URI.