In addition to the two approaches discussed in this article, it should be noted that “optimized” solutions are available for certain leading Unified Communications applications. These optimized solutions shift the media processing workload to the user device, thereby maximizing server scalability. Optimized solutions exist for Microsoft Skype for Business, Microsoft Lync 2013, Cisco Jabber for VDI, and Avaya one-X Communicator.

With HDX RealTime Webcam Video Compression, the video data is captured on the user device; it is then compressed and sent to the XenApp/XenDesktop session. Installation of the device drivers for the webcam is not required on the Virtual Delivery Agent (VDA). Device drivers are only required on the client device. It is recommended that the latest drivers are obtained directly from the webcam manufacturer’s website (or use the driver CD that came with the webcam). Sometimes, default drivers are installed when the device is first plugged in, but these drivers might not offer the video color space that the client’s codec is looking for, which might lead to higher CPU consumption on the user device as a result of color space conversion.

HDX webcam video compression requires that the following policy settings be enabled (all are enabled by default).

(If for some reason this media type negotiation fails, HDX falls back to our legacy way of webcam redirection, which is to use hard coded 352×288 resolution).

If Bandwidth consumption is a concern, High Definition can be disabled by applying the following registry key on the VDA:

With HDX Plug-n-Play Generic USB Redirection technology, the webcam is virtually detached from the client device and attached to the XenApp/XenDesktop session. This provides all the native functionalities of the webcam in the XenApp/XenDesktop session. HDX Plug-n-Play Generic USB Redirection requires the device drivers for the webcam to be available on both the client device as well as on the VDA.

Bandwidth usage for webcams using HDX Plug-n-Play Generic USB Redirection technology can vary based on the vendor and model of the device, but it is significantly higher compared to use it over HDX RealTime Webcam Video Compression. HDX Plug-n-Play for webcams is recommended to be used only under LAN conditions where bandwidth and latency are not constraints.

By default, webcams use HDX RealTime Webcam Video Compression technology. However, end users can override the default behavior and explicitly choose to use HDX Plug-n-Play Generic USB Redirection from the Desktop Viewer preferences tab of Citrix Workspace app, if the administrator has enabled remoting of USB devices through policies.

HDX Plug-n-Play is recommended only when there are application compatibility issues with HDX RealTime Webcam Video Compression or when advanced native functionalities of the webcam such as auto-focus are required. For better performance, Citrix recommends a XenDesktop VDA to have at least two virtual CPUs.

With Receiver for Linux, it has to be explicitly enabled. Refer the following link regarding information on how to configure this – Citrix Documentation – Optimize.

During production testing, the LifeCam vx-3000 or later and the Creative Optia Pro gave the best results in terms of bandwidth consumed and subjective video quality. Adjusting the contrast of the webcam can reduce upstream traffic significantly. This can be accomplished if the webcam ships with a system tray utility that runs on the user device.

DWORD EnableDeepcompress_Client – set it to 0 to disable H.264 encoding (and use Theora instead). By default HDX always prefer H.264. Set it to 1 to go back to default behavior.

There are settings that can be configured on the user device that can assist in troubleshooting and solving problems with specific webcams and networks. Generally, these settings must be adjusted as a last resort. Changing the settings too much can lead to severe video artifacts and video sluggishness.

To manually adjust (and force) the webcam video resolution, create (on the Client) two DWORD values named DefaultWidth and DefaultHeight under HKEY_CURRENT_USERSoftwareCitrixHdxRealTime.

The resolution directly affects the bandwidth consumed and the overall quality of the video. 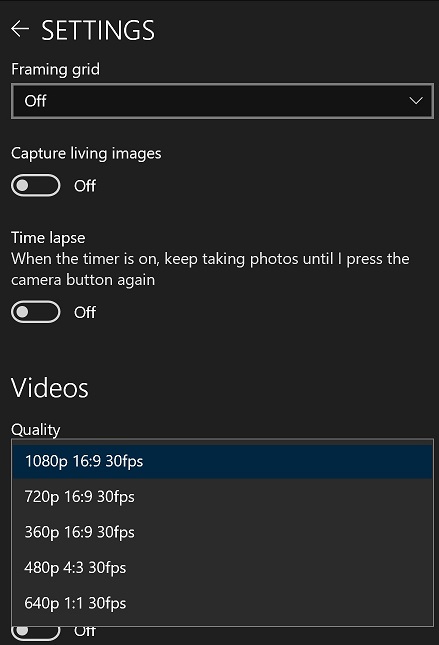 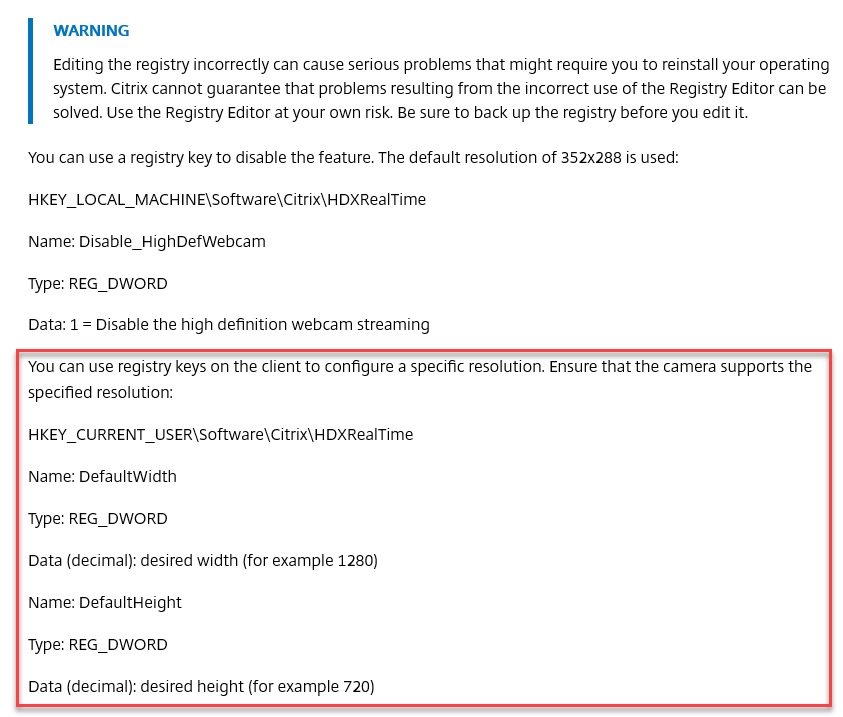 The preferred video frame rate can be adjusted by creating (on the Client) a DWORD (32-bit) value named FramesPerSecond under HKEY_CURRENT_USERSoftwareCitrixHdxRealTime. Because it is possible to input a value that the webcam does not support (e.g 31 FPS), the actual frame rate might be different as seen by the hosted application (e.g. 10 FPS). When this key is not present, a default value of 15 frames per second is selected. The actual frame rate used is dependent upon the Webcam.

The bandwidth usage can be tweaked by creating a DWORD (32-bit) value named TargetBitrate under HKEY_CURRENT_USERSoftwareCitrixHdxRealTime. Values are in bits per second, so if 300 kbps is desired, the value should be set to 300000. When this key is not present, the default value is 350000. During testing, somewhere between 250000 and 300000 was found to be the minimum values for the default CIF resolution or 480p that still produced acceptable video quality. If the resolution and frame rate are set to lower values then it might be possible to lower the bit rate and reduce bandwidth consumption. Lastly, setting the bit rate to zero has special meaning – zero indicates that the codec should operate in VBR mode. However, during production testing, the codec would generate excessive video artifacts so VBR mode is NOT recommended.

Citrix Workspace app for Windows supports H.264 (Default) and Theora (legacy) encoders. If for whatever reason you want to disable H264 (not recommended), the following registry key on the client can be used:

DWORD EnableDeepcompress_Client – set it to 0 to disable H.264 encoding. By default HDX always prefer H.264 decoding. Set it to 1 to go back to default behavior.

If you want to disable this on the VDA side instead, it is also possible by setting:

8.1. Device Manager on the Client would list the same webcam names as done by the Citrix Workspace app Desktop Viewer. Although keep in mind that there is no single designated place where they show inside Device Manager. This is device specific. Most common place is under Imaging Devices. Integrated webcams might show in other places.

8.2. Citrix Workspace app Desktop Viewer preferences should list all the available webcams on the client. If that drop down does not show webcams at all, that means the Client cannot access the local webcams.

By default, all multimedia policies set on the Controller are stored in these registries: 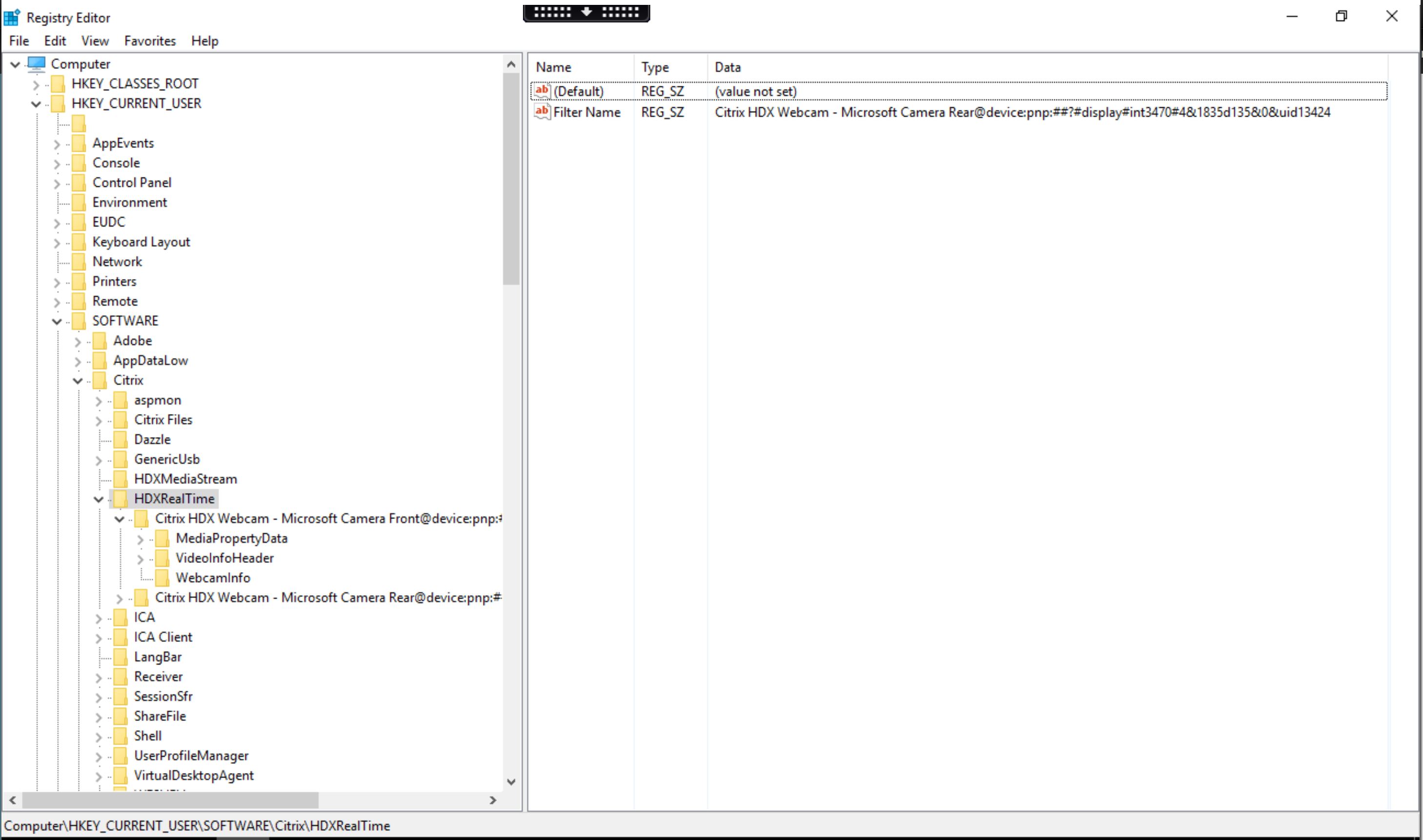 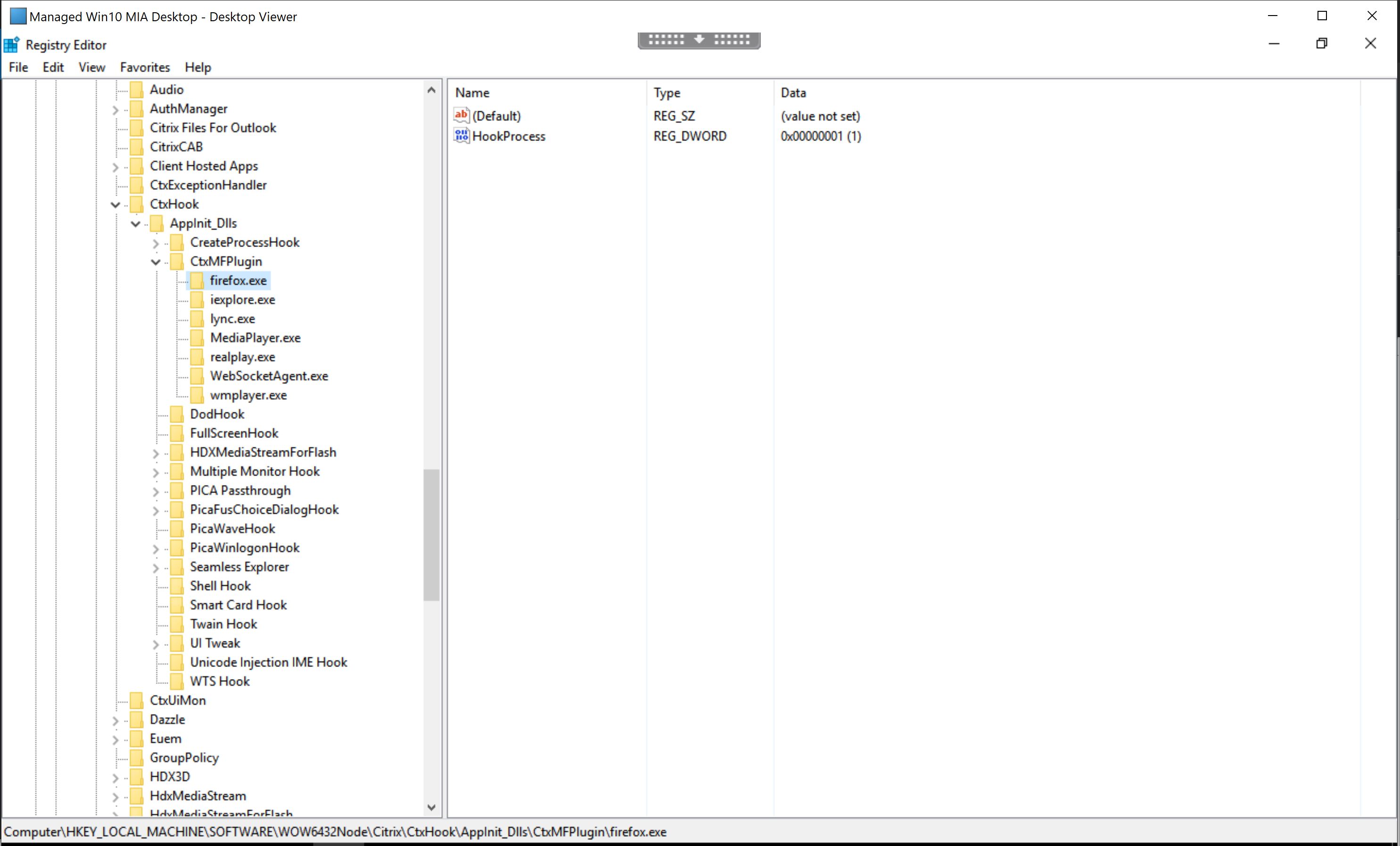