This article is intended for Citrix administrators and technical teams only.Non-admin users must contact their company’s Help Desk/IT support team and can refer to CTX297149 for more information

Users need to upgrade their Receiver for Windows to 4.3 before performing a Windows 10 OS in-place upgrade.

Note: Receiver 4.2 and earlier versions are not supported by Windows 10.

If you are using Receiver for Windows prior to 4.3 installed on the machine and try to upgrade from Windows 7, Windows 8 or Windows 8.1 to Windows 10, you might not be able to uninstall Receiver through Add/Remove Programs. Upgrade or uninstallation fails.

Occasionally, when Delete Locally Cached Profiles on logoff policy is enabled on Windows 10 Redstone, or on Windows Server 2016, NTUSER.DAT* files cannot be deleted when a user logs off.

When publishing an application, only the main executable file is specified. However, some applications might spawn additional processes that run in the background and are not closed by the corresponding main executable file. Additional processes might also be created, from scripts that are executed, or from specific registry keys, such as the RunOnceKey:

Because the Explorer.exe Desktop is not running when launching an application in one of these ways, there is no default mechanism in either Presentation Server or Windows to terminate these background processes when a user has exited the main application.

Presentation Server has a hard coded list of what are considered ‘System’ type secondary processes that are checked for and terminated once all user application processes have terminated, these include:

Note: To specify additional processes specific to your environment, see the Solution section of this article.

Proquota.exe is a process initiated by having a Windows 2000 policy, Limit Profile Size, enabled. This might conflict with the Seamgr.exe process. Manually terminating either of these two processes temporarily fixes the problem and allows the session to reset. This issue is resolved by installing Service Pack 2 for MetaFrame 1.8 for Windows 2000.

Sxplog32.exe is a process initiated by the Software Delivery Agent by Computer Associates and can be found in the userinit value of the winlogon registry key. Manually terminating the process temporarily fixes the problem and allows the session to reset.

Etlits.exe and Entell50.exe are processes initiated by Entrust 6.1 and can be found in the userinit value of the winlogon registry key. Manually terminating the process temporarily fixes the problem and allows the session to reset.

Wisptis.exe is a process that runs as a system service that provides pen-data collection for other components of the SDK. When a component needs to interact with the pen (for example, to collect ink or to detect gestures), this executable is spawned as a service to communicate directly with the input device. On a Tablet PC, Wisptis.exe interacts with the digitizer, whereas on a desktop it interacts with the mouse as well. The executable’s name is an acronym that references an outdated internal name for the team that developed it (Windows Ink Services Platform Tablet Input Subsystem). You cannot remove wisptis.exe by renaming or deleting it: Windows File Protection would reinstall the file the next time Adobe Acrobat 6.0 started. In general, the ways in which wisptis.exe can get installed on the system are by installing Journal Viewer using the Windows Update or installing Microsoft Office 2003.

If a starting program was specified under the Environment tab in the User Account Properties and if the ICA pass-through Client had pass through authentication enabled, Ssonsvr.exe was running in the ICA session of the user. When the user exited the application (specified in the Environment tab in User Account Properties), the ICA session could not be logged off; the administrator had to manually stop the Ssonsvr.exe process. The thread that caused the Ssonsvr.exe process to exit when the user logged off from the application was not being started.

Now the thread that causes the Ssonsvr.exe process to exit is started when the user logs off from the application.

Patch Tuesday was only a week ago, but it’s now time for this month’s round of optional updates. Typically, Microsoft does this in several installments, offering updates to different versions at different times. But today, Windows 10 version 1909, 1903, 1809, 1803, and 1607 are all getting updates.

The reason that they’re all getting patched today is likely because this is going to be one of the last times to do it. Starting in May, Microsoft won’t be releasing optional cumulative updates anymore, only Patch Tuesday updates. This is to focus on stability for those working from home during the COVID-19 pandemic.

This one does have one known issue to be aware of:


For those running Windows 10 version 1803, which is only supported for Enterprise and Education SKUs, you’ll get KB4550944, bringing the build number to 17134.1456. You can manually download it here, and there’s one highlight:

This one also has one known issue:


As mentioned earlier, these updates are optional. That means that you can get it through Windows Update if you opt into it, or you can install it manually. If you choose to not take the update, these fixes will be bundled into next month’s Patch Tuesday updates.

Advisory – When using the “Apply changes to subfolders” checkbox on a folder containing more than 30 subfolders, the attempt to save and apply permissions may time out. If this is the case, consider using Distribution Groups to easily manage permissions for large groups of users. 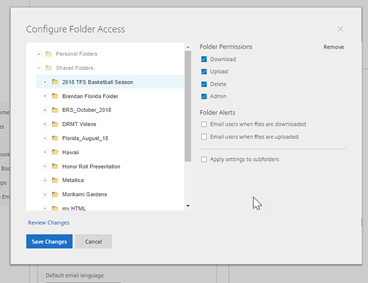 Designating a storage zone when creating a root level folder

Name, describe, and add users to your Shared Folder. Use the storage zone drop-down menu to choose the zone of your Folder from both public and private options. Click the Create Folder button.

Once your Folder has been created and you have uploaded files to it, you may edit the Folder’s zone by clicking on More Options > Advanced Folder Settings drop-down menu to the right of the folder name. Click on the storage zone drop down menu to select which zone to which you wish to migrate your folder and all of its contents. Please note that clicking the Save button after making a Storage Zone change will initiate a migration of data from the origin zone to the new zone of your choosing. During this time your data will not be accessible.

View-Only Sharing must be enabled for your account. Submit a request to ShareFile Customer Care to have this feature enabled.

This feature requires configuration changes to your NetScaler. Click here for information on how to configure your NetScaler to support View-Only Sharing.

Audio and Video files may be viewed with the view-only permission, but only if the audio and video files are stored on a public (Citrix-Managed) StorageZone. Only supported file types can be previewed, click here for supported types.

Due to the above, you cannot share audio and video files as a view-only message if they are stored on a private zone.

Once View-Only Sharing has been enabled for your account, a new setting will appear in Message Options when sharing files. Use the Allow Recipients To dropdown menu to select View Online Only. You may then customize how many views each user is permitted. 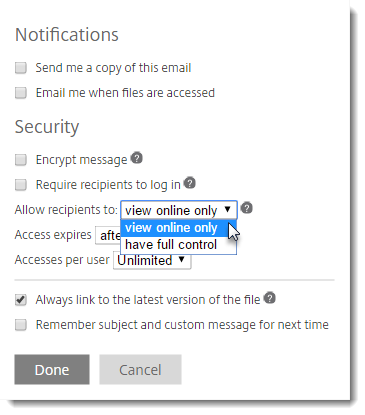 When your recipient accesses the download link, the Download button will not be present and the recipient will be prevented from printing or saving the file.

Note – Sharing audio and video files as a view-only message is only supported for audio / video files stored on a public StorageZone. See info on those file types earlier in this article.

Grant a User the View Permission

Grant users the View permission if you want to control access to files stored in certain folders. When adding new users to folder access, select the View checkbox to grant them the permission. When viewing the folder contents with this permission, your user will not be able to download or share files. They must use the magnifying glass icon to preview the files. 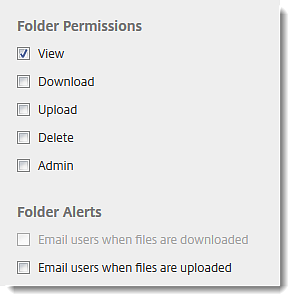 Note regarding Restricted Zones and DLP

The following files cannot be previewed or shared with the View-Only permission:

Yes, if you select to be notified when a file has been accessed.

Restricting Print works only with few files as Citrix has no control over Browser or Operating System. Microsoft Office files which redact data when printing and restrict from printing is due to Microsoft Office Online Servers restriction and not due to ShareFile.

Change options for Citrix Files for Outlook by clicking on the Options button on the Outlook home window. 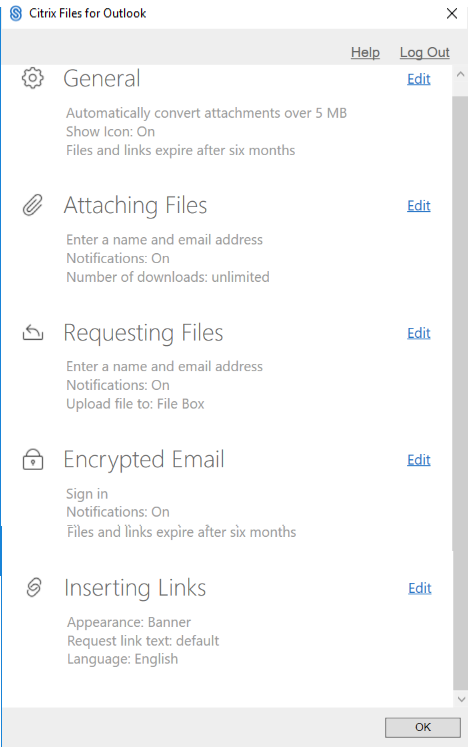 This allows you to make changes to the default settings under the following categories:

NOTE: Some options may be set and restricted by Administrators. 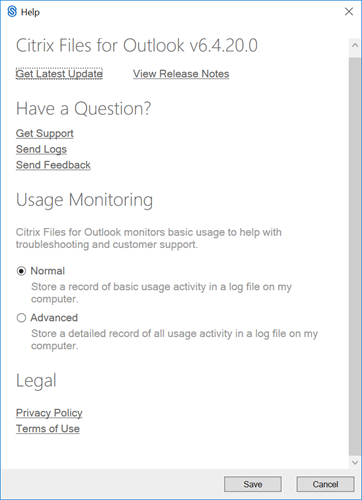 We are about to start a trial of Altiis and are looking at Patch/Monitoring/Asset Tracking of Windows 10 machines.

Once of the key areas is Windows 10 monitoring and ping response/processes running/free space on fixed drives etc and I was wondering whether 8.5 comes with any pre built policies for Windows 10 already or whether they would have to be created manually?

I can see on Connect that a policy was created for Windows XP/Vista, is there a similar one for Windows 10 or it is this one that I just need to adapt?

I have a policy name is File A with rule to detect by keyword. I want to monitor and block when endpoint copy file A to USB and HTTP/HTTPs so I enable option Removable Device and HTTPS, HTTP on Agent Configuration. I config Response Rule with Endpoint Prevention: Block when any protocol as Removable Device, HTTPS, HTTP, everything is okay.  But I have another policy name File B to classify another file and I want to monitor when it is copied to network file server –> I enable option Copy to Network Share on Agent Configuration. And DLP Agent still sent the log of File A when I copy it to File Server. How can I disable it because I only need log of File B when It is copied to File Server ?