Skip to main content
Reply to hidden text Enjoy Leave a like. *** Hidden text: You do not have sufficient rights to view the hidden text. Visit the forum thread! ***

Enjoy the post Hidden Content *** Hidden text: You do not have sufficient rights to view the hidden text. Visit the forum thread! ***

when doing blind timed SQL injection, timing is everything! if you do this multi-threaded, you need to take care that thread switching does not interfere …

The WEM System Optimization feature is a group of settings designed to dramatically lower resource usage on a VDA on which the WEM Agent is installed.

These are machine-based settings that will apply to all user sessions.

Sets of VMs may have been configured with different hardware configurations. For instance some machine may have 4 CPU cores and 8GB RAM, while others have 2 CPU Cores and 4GB RAM. The determination could be made such that each server set requires a different set of WEM System Optimization settings. Because machines can only be part of one WEM ConfigSet, administrators must consider whether they need to create multiple ConfigSets to accommodate different optimization profiles.

A purely visual option that will end the HDX connection to a remote session, giving the impression that the session has immediately closed. However, the session itself continues to progress through the session logoff phases on the VDA.

You can statically define the priority for a process. Every instance of, for example, Notepad that is launched on the VDA will be launched with a priority of the desired CPU priority. The choices are:

You can statically define how many CPU cores a process will use. Every instance of Notepad that is launched on the VDA will use the number of cores defined.

Process clamping allows you to prevent a process from using more CPU percentage than the specified value. A process in the Process Clamping list can use CPU up to the configured percentage, but will not go higher. The setting limits the CPU percentage no matter which CPU cores the process uses.

Generally, Process Clamping is not a recommended solution for keeping the CPU usage of a troublesome process artificially low. It’s a brute force approach and computationally expensive. The better solution is to use a combination of CPU spikes protection and to assign static Limit CPU / Core Usage, CPU priorities, CPU affinities values to such processes. 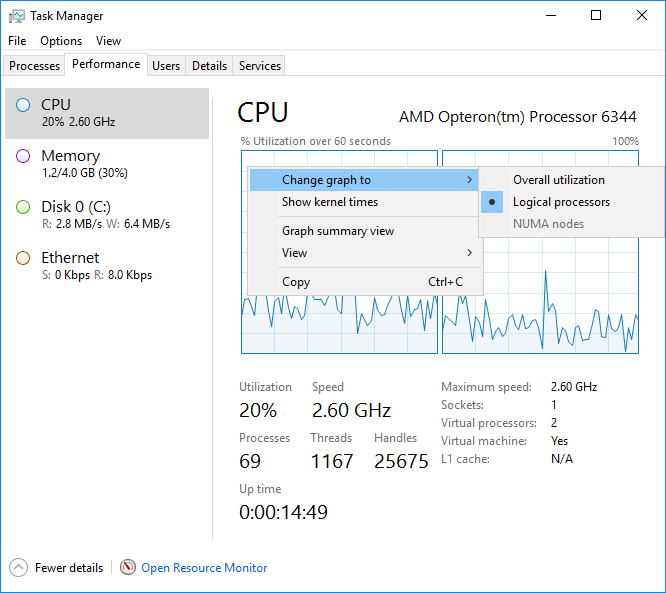 Users commonly work with a web app that uses Internet Explorer. An administrator has noticed that iexplore.exe processes on the VDAs consume a lot of CPU time and overall responsiveness in user sessions is suffering. There are many other user processes running and percentage CPU usage is running in the 90 percent range.

To improve responsiveness, the administrator sets the CPU Usage Limit value to 50% and a Idle Priority Time of 180 seconds. For any given user session, when a single iexplore.exe process instance reaches 50% CPU usage, it’s CPU priority is immediately lowered to Low for 180 seconds. During this time iexplore.exe will consequently get less CPU time due to its low position in the CPU queue and thereby reduce its impact on overall session responsiveness. Other user processes that haven’t also reached 50% have a higher CPU priority and so continue to consume CPU time and although the overall percentage CPU usage continues to show above 90%, the session responsiveness for that user is greatly improved.

As stated previously, all WEM System Optimization settings are machine-based and settings configured for a particular ConfigSet will apply to all users launching sessions from the VDA.

So if a process triggers the CPU Spikes Protection in User A’s session, the event is recorded for User A only. If User B starts the same process, then WEM Process Optimization behavior is determined only by process triggers in User B’s session. On each VDA the Spike Protection triggers for each user (by user SID) are stored in the local database on the VDA and refreshing the cache does not interfere with this stored history.

When Enable Intelligent CPU Optimization is enabled, all processes that the user launches in their session will start at a CPU Priority of High. This makes sense as the user has purposefully launched the process, so we want the process to be reactive.

If Enable Intelligent CPU Optimization is enabled and a process’s CPU Priority value has been statically set to High, then the process will launch at High. If the process triggers Spikes Protection, it will be relegated to Low priority for 180 seconds (if default setting is used), but then return to High priority afterwards.

WEM determines how much RAM a running process is currently using and also determines the least amount of RAM the process requires, without losing stability. The difference between the two values is considered by WEM to be excess RAM. The process’s RAM usage is calculated over time, the duration of which is configured using the Idle Sample Time (min) WEM setting. The default value is 120 minutes.

Let’s look at a typical scenario when WEM Memory Management has been enabled:

Then the user is finished with Internet Explorer and minimizes it to the Task Bar. When the process percentage CPU usage drops to the value set by the Idle State Limit (percentage) value (default is 1%), WEM then forces the process to release the excess RAM (as previously calculated). The RAM is released by writing it to the pagefile.

When the user restores Internet Explorer from the Task Bar, it will initially run in its optimized state but can still go on to consume additional RAM as needed.

When considering how this affects multiple processes over multiple user sessions, the result is that all of that RAM freed up is available for other processes and will increase user density by supporting a greater amount of users on the same server.

The value set here is the percentage of CPU usage under which a process is considered to be idle. The default is 1% CPU usage. Remember that when a process is considered to be idle, WEM forces it to shed its excess RAM. So be careful not to set this value too high; otherwise a process being actively used may be mistaken as an idle process, resulting in its memory being released. It is not advised to set this value higher than 5%.

These settings allow you to optimize the I/O priority of specific processes, so that processes which are contending for disk and network I/O access do not cause performance bottlenecks. For example, you can use I/O Management settings to throttle back a disk-bandwidth-hungry application.

The process priority you set here establishes the “base priority” for all of the threads in the process. The actual, or “current,” priority of a thread may be higher (but is never lower than the base). In general, Windows give access to threads of higher priority before threads of lower priority.

When selected, this option enables manual setting of process I/O priority. Process I/O priorities you set take effect when the agent receives the new settings and the process is next restarted.

I/O Priority: The “base” priority of all threads in the process. The higher the I/O priority of a process, the sooner its threads get I/O access. Choose from High, Normal, Low, Very Low.

This adopts exactly the same principles as Enable Intelligent CPU Optimization, but for I/O instead of CPU.

By default, WEM CPU Management excludes all of the most common Citrix and Windows core service processes. This is because they make the environment run and they need to make their own decisions about how much CPU time & priority they need. WEM administrators can however, add processes they want to exclude from Spikes Protection to the list. Typically, antivirus processes would be excluded. In this case, in order to stop antivirus scanning taking over disk I/O in the session, administrators would also set a static I/O Priority of Low for antivirus processes.

Perfectly working fresh installed Manager installed last week with like 5 clients now is not functional all of a sudden. Green dots missing on all clients first then when opening SEPM I get ‘Failed to Connect to Server’. All Symantec services are running on the server except Symantec Endpoint Protection Manager Webserver. It will not start. There are no related errors in the Event Logs.

Here is the first part of the scm-server-0 log file:

I’m looking for a way to assign automatically the cost center to the computers. I’ve been trying to do that by setting a CMDB rule, but I’ve not been able to do it correctly.

I was looking for other comments/threads, but couldn’t find any response. This is the only one I could find that’s similar: https://www.symantec.com/connect/forums/update-cost-center-ownership?ts=1555939553

Any ideas? Thank you!

The server doesnt appear to be connecting to the DB. I need assistance getting this resolved.
Attempted to add a replication server. Need to determine if DB is corrupt.

Does the fix only can be done by Symantec TSE?