Behaviour prior to Profile Management 7.18

There have been two Outlook-related performance challenges with Citrix Profile Management.

To best explain, we’ll take a user that has an existing Profile Management 7.17 profile and launches published Outlook (or opens Outlook in a desktop session). Outlook has been configured to use the Outlook .OST cache. The location of the file is typically:

In Outlook cached mode, the OST file can be very large, so there is a significant overhead if the OST file is part of Profile Management logon/logoff synchronization.

This is a machine-based file, which means it holds search index data for all users logging onto the machine. If a user launches an Outlook session (or opens Outlook in a desktop session) on a VDA machine that they haven’t access previously or haven’t accessed for a while, the Outlook search index has to be rebuilt in Windows.edb. Outlook searches have to wait until re-indexing finishes. The location of the Windows search index database is typically: C:ProgramDataMicrosoftSearchDataApplicationsWindowsWindows.edb

We can see this design in the image below: 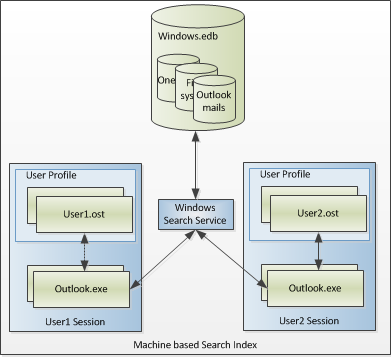 The Profile Management 7.18 release introduced a feature to address these Outlook-related performance challenges.

To explain we’ll use the same user as above, but logging on to a 7.18 version VDA for the first time.

During the Profile Management logon, the user’s Outlook-related search index is split out of the Windows search index database (Windows.edb) and written to a VHDX file created at:

The remote VHDX file is then mounted locally in the user’s local profile at:

The Outlook .OST file is converted into a VHDX file and stored at:

The remote VHDX file is then mounted locally in the user’s local profile at (default):

During the Outlook session, changes to the Outlook search index and Outlook .OST are made directly to their respective VHDX files over SMB.

When the user logs off the session, both VHDX files are unmounted from the local profile. Because the VHDX files had been mounted over SMB, no synchronization is required at Profile Management logoff. The additional registry settings are synchronized to the user’s profile store (or before if the Active Writeback Registry feature has been enabled).

Install the applications on the VM that you want to publish using this master image. Shutdown the VM from Azure Portal once you have finished installing applications. Make sure that the power status for the VM in Azure Portal is Stopped (deallocated)

When creating MCS catalog we need to use the .vhd file that represents OS disk associated with this VM as master image for the catalog. If you have the experience of using Microsoft Azure Classic connection type in XenDesktop, you would have captured specialized image of the VM at this stage, but for Microsoft Azure connection type you don’t have to capture the VM image, you will only shutdown the VM and use the VHD associated with the VM as master image.

In the case of Azure Managed disk, it will be available directly under the Resource Group that you had created or as a part of the Virtual Machine’s Resource Group, as show below:

Note: If you don’t shutdown the master image VM and select the corresponding VHD to create a catalog, the catalog creation will fail. So make sure if you are selecting the VHD which is attached to running VM instance, the VM is in Stopped(deallocated) state.

Once the provisioning is complete, you will find new resource group created in your subscription that has VM RDSDesk-01 as per the naming scheme we provided, NIC corresponding to that VM and a storage account that XenDesktop created to host the OS disk and the identity disk for the VM. The VM will be hosted on the same network as that of the selected hosting resource during catalog creation and the default power state of the VM will be Shutdown(deallocated).

To find out which resource group in the Azure portal corresponds to the catalog you created from studio, follow the steps below.

Make you sure you add all the Virtual Disks. You can display them with the following command.

If they don’t add to the correct number contact support for further verification.

There are two possible solutions:

1. Upgrade your existing VHD vDisks to the VHDX file format.

– This can be done by running the Citrix Provisioning vDisk Creation Wizard and selecting the VHDX format.

– Alternatively, you can leverage Hyper-V to properly convert the format from VHD to VHDX.

In our example there was a failed publish image task on March 11th. This left the image vhd in the Layered Images folder.

Looking at the ELM logs export, one can see the below:

1) “Camlogfile”, shows the error, “File already exists”, as the new image is being written to the disk. The new name is then saved with the additional characters.

When a task is force-canceled, there is no clean-up performed, so temporary disks can be left in the Layering Service repository. You need to manually delete these. You can do this by logging in as root, or through any file manager like WinSCP or FileZilla.

Files can be left in one of these two folders:

If no tasks are running, then there should be no files in either folder. If there are tasks running, please allow them to complete or be canceled before proceeding.

Similarly, here are four temporary files for publishing operations which were not cleaned up properly. Again, if there are no running tasks, you can safely delete these files.

If you happen to delete any of these files while a task is running, the task will fail. But subsequent asks will run normally.

To deploy an MCS image to Azure, you decide to use the Azure connector in App Layering. This produces a virtual disk that is primed to run through Windows Setup. You attach it to a VM, power it on, and find that Windows Setup never completes. If you look at the console screen shot in the debugging page in Azure, you see an image like this: That is a black screen that says Getting Ready, with a CMD (command prompt) window titled ERROR HANDLER, at the path C:Windowssystem32oobe. This means Windows Setup failed. You can download the VHD and open it up to read Windowssetupact.log, Windowspanthersetupact.log, WindowslogsCBScbs.log, but that won’t help too much.

After performing flat file restore, the VM will need to be imported in Hyper-V manager.

Step 1. Get the backup that you need to restore with mminfo command. E.g: (If the command is run from the client add the ‘-s <nwserver>’ switch.)

Issue the restore command as below:

The above command requires the parameter NSR_SNAP_TYPE. As the backup was done using rct, this value needs to be specified with this parameter.

Also note this command is sensitive to the order of operands. Use the order operands as shown above. See below the correct command:

e.g of Incorrect command (same command as above, except the order of the operands is changed i.e –A is used after –x)

This command fails with the following error:

Also the ‘\’ in the saveset name is required. Its not a typo. This is mandatory otherwise the restore will fail.

When the restore is successful, its reported as below:

For RCT backups, flat file restore, restores the vhd/vhdx files in the VM. It does not restore the configuration files (the VMCX, VMRS files). The VM cannot be imported into Hyper-V manager. However a VM can be created and the recovered vhd/vhdx file can be associated with the VM to rebuild the VM. Because the config files are not recovered, VM information like, memory, CPU’s, Network etc is not recovered.

When the backup type is VSS, flat file restore restores all the files including the configuration files and this can be used to import the VM

This article describes the procedure to perform Image Level Restore (Full VM restore) of Hyper-V VMs backed up with NMM 18.1. Image level restore is used to recover from situations of loss/corruption of virtual machine. This article demonstrates this restore procedure for Hyper-V 2016 server backups with NMM 18.1.

2. The restore host (host from where the restore is performed) needs to be in the same domain as the Hyper-V host

3. The restore host needs to have a client resource on the NetWorker server.

4. The user needs to be a member of the ‘operators’ group on the Networker server or have be listed under ‘Remote access’ attribute of the source Hyper-V client.

5. The user should be a domain user that is part of the local administrators group of the target Hyper-V node and the host from where the restore is initiated. Note for SMB VM restores, you will need additional rights on the SMB Share, if the restore is being done to the original location. The additional rights will include rights to delete any user’s files and folders on the share and rights to create files/folders on the share. If the restore is being done to an empty folder on the share, these rights may not be required. If the restore fails due to lack of permissions, the error message in the failure will indicate so.

4. Click ‘Recover…’ and additional recover choices are seen as below:

The default is to recover to the original location using the current cluster owner Hyper-V node. In the above the host to recover is ‘Hypv2016N2’. NMM picked this node by default as it was the cluster owner node at the time of restore.

Note: Restore to the original location will overwrite the source virtual machine.

5. When you click next, the restore summary is shown. Notice the ‘warning’. Proceed if you need to replace the existing VM from a backup copy.

Relocating the Virtual Machine during Restore.

3. The message below indicates ‘Restore and registration completed successfully.’ Note when the VM is relocated to the different path, the VM files (vhd’s and config files) in the original path are not deleted. If these are no longer required after relocating the VM to a new path with the restore, then delete these files manually.

This concludes the procedure for Image Level Restore of Hyper-V.